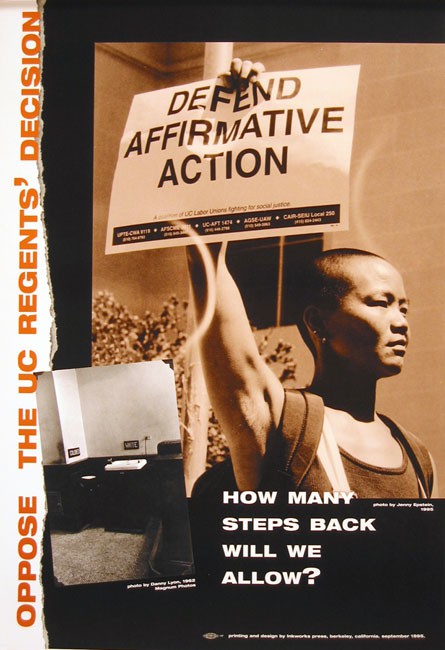 The slogan of this 1996 political poster, coupled with a pre-1965 photograph of a segregated drinking fountain in the American South, urges support for affirmative action programs. "Affirmative action" refers to any public policies and initiatives designed to help eliminate past and present discrimination based on race, color, religion, sex, or national origin.

The phrase first appeared in President Lyndon Johnson's landmark 1965 civil rights legislation. California, however, mounted one of the first legal challenges to these widely adopted programs in the 1978 Supreme Court case, Bakke versus the University of California, which limited the use of affirmative action in higher education.

In 1996, Proposition 209, ardently supported by Governor Pete Wilson and UC Regent Ward Connerly, sought to ban affirmative action for all state government programs, including instances of state employment, contracting, and public education. The measure passed and was upheld in court. Affirmative-action programs continue to be hotly debated in a current case brought by the University of Michigan that recently appeared before the Supreme Court.