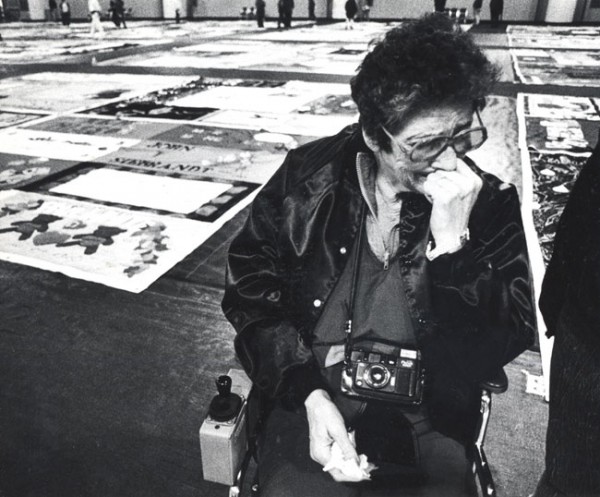 Although the AIDS Memorial Quilt began in 1985 with a single panel sewn by San Francisco activist Cleve Jones to commemorate one person, his friend Marvin Feldman, the quilt has grown to include more than 44,000 panels and 84,000 names as of 2003. Each of those names represents a personal tragedy. In this 1991 photo taken at a public display of the AIDS Memorial Quilt in the Oakland Convention Center, a mother in a wheelchair grieves the loss of her son.

The very definition of epidemic means "among the people," "widespread," and "fast-acting." Even so, the numbers and statistics that describe the AIDS pandemic are hard to fathom - beginning with 189 reported cases of the as-yet-unnamed AIDS virus in 1981 to the 2003 worldwide statistics of 14 million people dead and 70 million infected with the HIV virus. In the face of such staggering, hard-to-comprehend numbers, it is tragically easy to lose sight of the human face of loss and the grieving friends and family members represented by each of those numbered millions.

Jones conceived of the AIDS Memorial Quilt precisely to dramatize those numbers. The origins of the world's largest community arts project began in San Francisco in 1985, during a candlelight vigil for Harvey Milk, San Francisco's first openly gay elected politician. Jones, as a co-organizer of the event, had just learned that more than 1,000 people had died from AIDS by 1985, but the federal government had yet to respond or offer funding for solutions.

Seeking to confront the government's silence, Jones suggested that marchers write down the names of their friends and tape the placards to the wall of the U.S. Federal Building after the vigil. While standing on a ladder at the end of the event, looking over the squares of white signs, Jones was struck with an insight - the placards resembled a patchwork quilt. The symbolism of a quilt, Jones later noted, spoke of comfort, nurturance, remembrance, and community. An organizer at heart, he gathered friends together to launch The Names Project in a San Francisco storefront. The first public display of the AIDS Memorial Quilt took place on October 11, 1987, when the Quilt was unveiled at the National Mall in Washington, D.C., during the National March on Washington for Lesbian and Gay Rights.

All who have seen the Quilt speak of its great emotional power, turning sports arenas into cathedrals of remembrance. Since its creation, portions of the AIDS Memorial Quilt have gone on display in more than 50 cities throughout the United States and Canada. If it were spread out in its entirety, it would be larger than 26 football fields. Even so, these panels only represent 19 percent of the people in the United States killed by AIDS.

The last time the entire Quilt was displayed was in 1996 in Washington, D.C. when it covered the entire National Mall. On that occasion, Bill and Hillary Clinton attended the ceremony, becoming the first president and first lady to visit the AIDS Memorial Quilt.

There are now 23 Names Project chapters in the United States and 46 independent affiliates around the world. Countries from as far away as Argentina, the Netherlands, Taiwan, and Zambia have contributed panels. The Quilt itself was nominated for a Nobel Peace Prize in 1989. That same year, a documentary about the project, Common Threads: Stories from the Quilt won an Academy Award for best documentary. Cleve Jones is alive, retired, and happily living in Palm Springs, California. In 2001, the Names Project moved from its San Francisco headquarters to Atlanta, Georgia, perhaps in recognition of the fact that since 2000, the number of newly infected African Americans and Latinos outnumber white homosexuals.