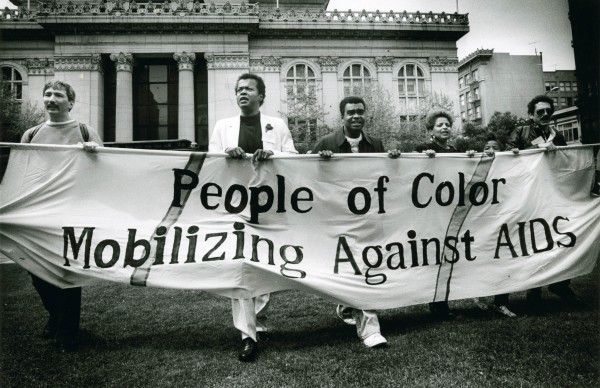 This photograph, taken on April Fool's Day in 1989, shows minority AIDS activists marching to Oakland's City Hall to demand programs and funding for AIDS prevention and education in their communities. The disease first emerged between 1980 and 1981 in San Francisco, Los Angeles, and New York. Doctors there reported to the Federal Centers for Disease Control (CDC) they had seen a handful of people suffering from Kaposi's sarcoma, an extremely rare form of cancer, or pneumocistis carinii, a rare form of pneumonia, and swollen lymph nodes. The first wave of sufferers who sought medical attention was overwhelmingly white gay men. As a result, the few politicians, journalists, and members of the public who were paying attention responded as if AIDS was a gay disease affecting the white community.