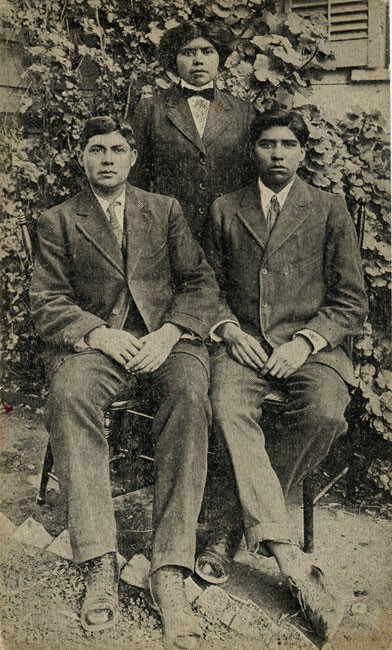 According to written records held with this photograph, "These Indian young people, Joseph, Andy, and Lizzie, were refused entrance to a local public school as children. Later, after attending school elsewhere, they returned and sang in a public service, arousing much surprise at their rapid development and shame and confusion because of former prejudice and denial.". ca. 1910. Photographer unknown. Gelatin silver print. Collection of Oakland Museum of California. Gift of Robert Reeves.

"…The new students entered into a regimented environment.…Their long hair was clipped to the skull, sometimes as part of a public ritual in which they renounced Indian origins. They were forbidden to speak native languages, often under threat of physical punishment."
- Peter Nabokov, ed. Native American Testimony discussing Indian boarding schools

Yet boarding schools were sometimes the only educational option, since segregation prevented Native Americans from attending most California public schools until the 1920s. For example, racist whites refused to let the students in this photograph attend a local public school, and they were forced to attend school elsewhere.