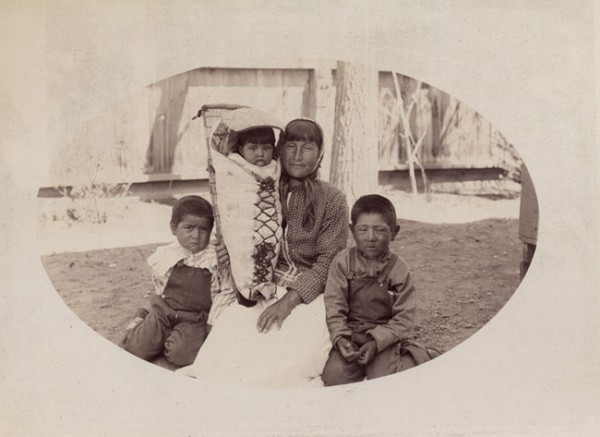 A woman and three children described as "Eastern Sierran" California Indians pose for the camera. The baby is wrapped into a cradleboard. ca. 1910. Photographer unknown. Gelatin silver print. Collection of Oakland Museum of California.

"The Indian takes to beet farming as naturally as the Italian takes to art or the German to science…. Even the little papoose can be taught to weed the rows just as the pickaninny in the South can be used as a cotton picker."
- Indian affairs commissioner Francis Leupp on why Native Americans should be trained as farm laborers

The Dawes Act, passed by the U.S. government in 1887, was implemented in California in 1893. Through Dawes "allotment" two things were legally accomplished: the theft of Native American ancestral lands for sale to the growing number of white settlers in California, and the splitting apart of tribes into individuals or family groups.