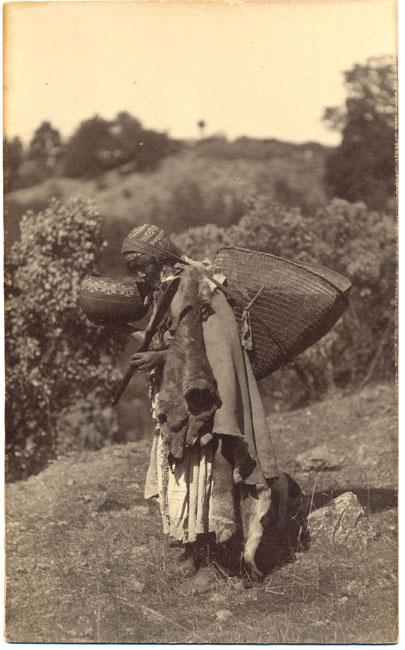 With no written language, art was the primary form of expression among Native Americans. For the Klamath Indians, basket weaving was one of those arts that served both a utilitarian and a cultural purpose. The Klamath tribesman depicted here carries a burden basket woven from bear grass, which was an important tool for gathering their staples of roots and lily pad seeds. A primitive culture, the Klamath Tribe populated the interior of Oregon, Northern California, and Washington, living mainly off the rivers and marshes.

In the wake of the Gold Rush, Native Americans in this region were forced to hand over 12 million acres of their lands to the U.S. Government, receiving the 800,000 acres Klamath Indian Reservation located in Southern Oregon in exchange. White settlers were empowered by the 1850 Act that declared California Indians vagrants if they were not on a reservation or "protected" by a while man. As a result, they displaced and decimated the Klamath populations. Basketry is one of the few remnants of this culture.