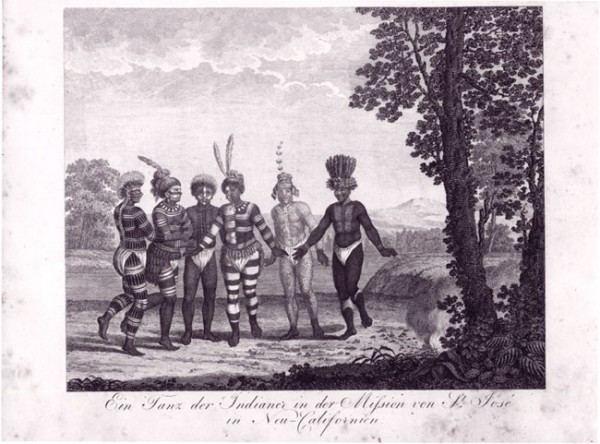 This image depicts a group of California Indians, decorated with body paint and tattoos, performing a dance. Before the arrival of Europeans, California was home to some 300,000 Indians.

The original Californians comprised a diverse mixture of traditions and lifestyles. This diversity was a reflection of the California environment. California Indians can be grouped into four cultural areas: the south, central, northwest and northeast.

The tribes of Southern California, including the Kumeyaay, Tongva and Cahuilla, inhabited the hottest and driest lands in the state. While those along the coast could rely on the Pacific Ocean to provide them with the necessities of life, others in the interior deserts roamed vast expanses to find the resources they needed. Tribes built their dwellings with woven reeds, tied loosely together to allow ventilation. For food, groups of this area harvested acorns and piñon nuts as well as hunted deer and rabbits. Besides providing the necessities of life, the land was used for artistic expression. This art included Pictographs, pictures and symbols painted on rocks, Petroglyphs, carving and scratchings cut into rocks, and Geoglyphs, large designs carved into the ground.

The cultural area of central California covered almost half of the present-day state and was home to groups such as the Ohlone, Yokuts and Maidu. With abundant rainfall the region supported a wide variety of plant and animal life. The homes of this area were coned shaped, built from reeds in the valleys and tree bark in the mountains. The acorn was a staple of the central California diet. After being ground into flour, acorns were boiled in water to make a "mush.". In terms of artistic expression, the Indians of this region were skilled basket makers. The intricate designs woven into these baskets expressed not only the individual inspiration of the maker, but also the shared experiences of the group.

The smallest yet most environmentally varied cultural area of California was the northwest. Due to the severe weather, groups such as the Yurok, Hupa, and Shastans built homes that were the sturdiest and most elaborate in the state. These structures usually consisted of wooden planks arranged in a rectangle and built over a sunken pit. Along with acorns, salmon was the most important food source in the northwest diet. . The fish was often smoked over an open fire and made into jerky. Unlike Indians in other parts of California, the natives of the northwest were interested in the accumulation of wealth. Bird feathers, animal skins, and Obsidian blades were all highly prized and used to ornament colorful costumes.

The lands of the northeast, home to the Modoc, Achomawi, Yana, and others,were much drier and cooler than other parts of the state. Homes were cone shaped and built from cedar bark. Because oak trees were in short supply, the groups here relied less on acorns than fish, waterfowl, and big game for their subsistence needs. Basket making was the primary form of artistic express, yet the greater difficulty in finding food meant less time could be devoted to their manufacture.

The world of the California Indians would remain unchanged until 1542. In that year, Juan Cabrillo sailed up the California coast and claimed the land for Spain. It would be 200 years before the Spanish would arrive in force to colonize the land, but the stage had been set. This interaction of cultures would have disastrous consequences for the Indians of California.