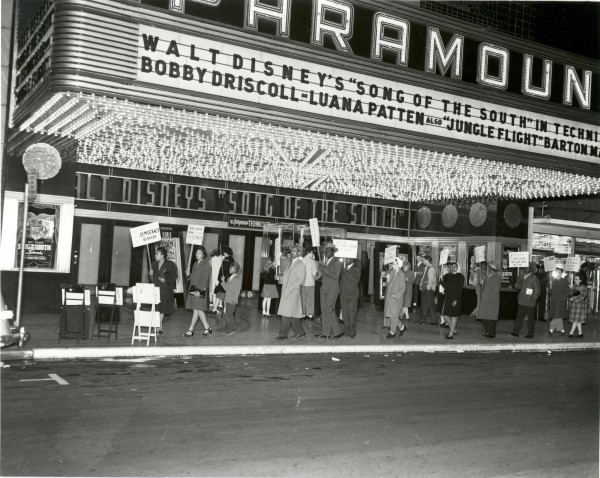 A racially diverse group of protesters carried signs with the above messages outside of the Paramount Theater in downtown Oakland. The year was 1947, and the protesters included African Americans and whites, women and men, youths and elders. They were protesting as part of a nationwide boycott that sought to ban the Disney movie Song of the South because of its racist messages about African Americans. The location of the protest was significant: in the 1940s, downtown Oakland was an elegant district with fancy hotels, expensive department stores, and several large-scale movie "palaces."

Walter White, the executive secretary of the National Association for the Advancement of Colored People (NAACP), telegraphed major newspapers around the country with the NAACP's opinion that the movie "helps to perpetuate a dangerously glorified picture of slavery" and "gives the impression of an idyllic master-slave relationship which is a distortion of the facts." Racially diverse groups of protesters, including African Americans, Jews, and other whites, organized to picket movie theaters in major American cities such as New York City, Los Angeles, San Francisco, and Boston. Yet the racial "harmony" demonstrated by these integrated groups of protesters was not the case in other parts of the United States at that time.

California's major cities strongly felt this population explosion. Many military bases, shipbuilding facilities, and aircraft manufacturers involved in the war effort were based in Oakland and other coastal California cities like Los Angeles, San Francisco, and San Diego. Not only were Californian African American communities suddenly politically active, but they had large enough numbers to become an actual political force for change.

A. Phillip Randolph, president of the strongest African American union, the Brotherhood of Sleeping Car Porters, demonstrated this new African American political power on a national scale in 1941. Randolph and other African American labor leaders represented workers who were a vital source of wartime labor. When these leaders lobbied President Roosevelt for a ban on racial discrimination in defense industries, he gave in and issued an executive order to that effect. Oakland's labor leaders brought similar influence to bear: Oakland and other California cities had a history of segregation in schools, unions, and employment, which changed somewhat in the 1940s due to the federal government's need for war workers and the organization of politically and socially active African Americans.

After World War II, however, things changed. White male soldiers returning from the war needed jobs, and they began to be hired into positions that African Americans might have held during the war. In some southern cities, returning African American soldiers were tortured and killed by lynch mobs who feared the effect these war heroes would have on the southern social order. In comparison, whites and African Americans came together in Oakland after the war to combat racism and prejudice in protests such as the one pictured above. Oakland's legacy of ongoing political activism by African Americans and cooperation between races to combat racism foreshadowed the next decade's Civil Rights movement.

Resources:
The film: Song of the South