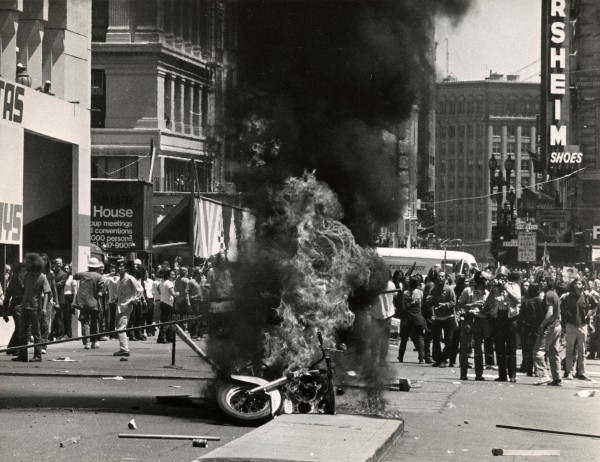 Click image to zoom in.
Or view larger version. Police motorcycle bursts into flames in downtown San Francisco as many anti-war protestors fill the streets around it. May 12, 1972. Roy Williams, photographer. Gelatin silver print. Collection of Oakland Museum of California. The Oakland Tribune Collection. Gift of ANG Newspapers.

Protests against the war were winding down by 1972. They had reached a zenith in the spring of 1970 when National Guardsmen at Kent State fired their M-1 rifles into crowds of taunting students who were responding to Nixon's "incursion into Cambodia", killing four students and wounding nine others.

Over one million students on college campuses demonstrated against the invasion of Cambodia and the Kent State killings. In California, then Governor Ronald Reagan closed college campuses in response to the outpouring of protests.