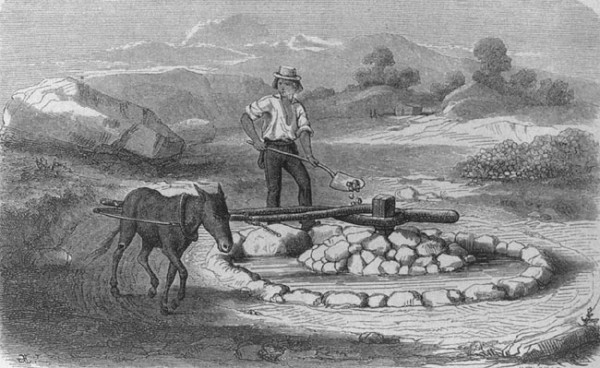 A Mexican miner working with a mule.. 1862. H. Delaville and G. Chassevent, artists. Steel engraving on paper. Collection of Oakland Museum of California.

The story of Mexicans and Mexican Americans during the Gold Rush is particularly interesting because they were considered foreigners even though many were born in California and California was part of Mexico until 1848. At the beginning of the Gold Rush, Mexicans outnumbered Americans in the state. The Mexicans as a group were more experienced and capable miners than the Americans, and often they were the ones who taught mining techniques.

However, as gold fever spread throughout the United States and more American citizens came west, things became more difficult for Mexican miners. Because they were legally foreigners, in the gold fields they were subject to various taxes and regulations limiting where they could hold claims. They were also subject to racism and discrimination from American miners; for example, they received lower wages for similar work and, in some cases, were attacked by mobs. At the same time, unscrupulous U.S. speculators, who in many cases sold land they did not own, were overrunning Mexican land claims, which had been guaranteed by the U.S. government. Although the courts eventually ruled in favor of Mexican landowners, it was too late and they were never properly reimbursed for their losses.

This image from 1862 shows a Mexican miner working with a mule.