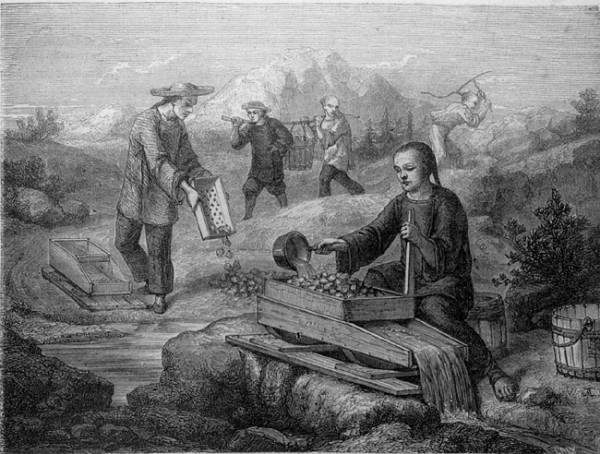 Although the Gold Rush began in earnest in 1849, large groups of Chinese miners did not arrive in California until 1852. There were opportunities in California, although the Chinese also faced hostility and discrimination. California passed a foreign miner's tax in 1852 specifically targeting Chinese immigrants. In some instances, Chinese miners were attacked by white mobs.

Chinese citizens had no legal recourse, because they were prevented from becoming American citizens and also barred from testifying in court. Chinese miners also faced subjugation and oppression from other Chinese, including those who sold expensive tickets to America and exacted months or years of forced labor in return. In addition, Chinese miners were usually prevented from working new mines; they were relegated to sites already picked over by white miners.

Despite all these obstacles, many Chinese did find some success in the gold fields. Others sought economic opportunities elsewhere, including restaurants and most successfully, laundries.

The Chinese had a tremendous economic impact on the new state. Between 1852 and 1870, monies collected from the Chinese via the foreign miner's tax totaled five million dollars, or roughly one-fourth of the state's revenue. Later, Chinese workers were largely responsible for the construction of the Central Pacific Railroad. Despite these contributions, American prejudice toward the Chinese continued, and in 1882 the United States passed the Chinese Exclusion Act, which prohibited the entry of immigrants from China.

This image shows five Chinese miners panning for gold. They are dressed traditionally.