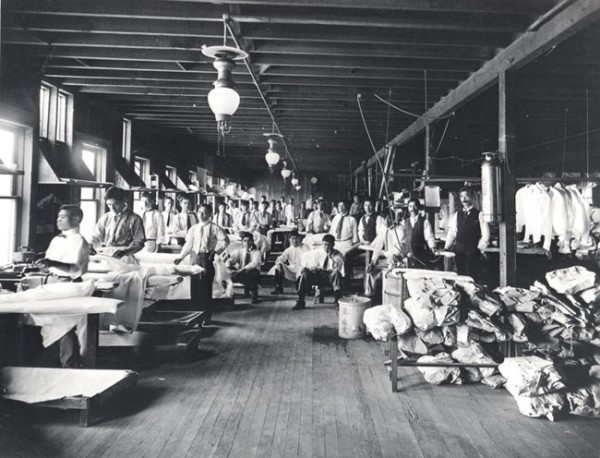 Japanese immigrants were recruited to come to California as laborers as early as the 1860s. Regarded as skilled agriculturalist and hard workers, the flow of Japanese into the state increased well into the turn of the century. Californian labor contractors would contract the immigrants to work for the railroads, canneries, and the farmland of the central valley, and by the by the turn of the century they were recognized as important contributors to California agriculture. Many Japanese turned to the cities, where they ran small businesses that provided services (boarding houses, restaurants, barbershops, gambling houses, etc.), such as the laundry pictured here. While tens of thousands of Chinese had immigrated to work on the transcontinental railroad, and then in the mines, the Japanese arrived at a time when this state was rapidly filling up with white people migrating west.

With the increase in Japanese immigration also came a growing discrimination against them. Like the Chinese before them, the Japanese were segregated into Japanese communities within larger urban communities. The Japanese were not afforded equal rights or equal opportunities. Trade unions, labor organizations, and white supremacist groups lobbied to end Japanese immigration, as they had done with the Chinese in the 1882 Chinese Exclusion Act, which barred immigration of Chinese nationals for ten years. This growing anti-Japanese sentiment was fulminated by the press. Finally, in 1906, the San Francisco School Board made the decision to segregate all Asian children into separate schools.

Japan was willing to take steps to limit the number of passports issued to residents attempting to enter the United States, but it was no less wounded by this San Francisco law directed at its own people. Because Japan had recently defeated a Russian attempt to expand its national boundaries in the Far East, President Theodore Roosevelt was determined to preserve the relationships between Japan and the United States. The result of negotiations between the two countries during 1907 and 1908 was the Gentleman's Agreement. Under the auspices of this agreement, Roosevelt summoned San Francisco's mayor to Washington, D.C. and persuaded him to rescind the segregation order. The Japanese government, in turn, agreed to deny passports to laborers intending to enter the United States.

The Gentlemen's Agreement did not end Japanese immigration, though. A provision allowed the wives and children of laborers, as well as laborers who had already been in the United States, to enter the country. From 1908 to 1924, Japanese women continued to immigrate to the United States, and became known as "picture brides" because they were married in Japan to immigrants who had only seen a picture of them.

While the Japanese found ways into the country, they did not enjoy the rights of citizenship in California. Governor Hiram Johnson enacted the Alien Land Law in 1913 which prevented non-citizens from owning property in California. And in the case of Ozawa v. United States, the Supreme Court ruled that Japanese immigrants were not eligible to become American citizens because they were neither white nor of African descent. While Californians embraced this ruling, it created a legal issue around defining what it meant to be white. This legal debate around the definition of "white" would affect all immigrants seeking to enjoy the rights of citizenship in the United States.

A movement to curtail Japanese immigration was finally enacted during Calvin Coolidge's administration with the Immigration Act of 1924, legislation that blocked Japanese immigration completely. The act remained in effect until well after World War II. Like the Chinese who came before them, the Japanese were welcome when their labor was required to build out the state. But when it came to enjoying the rights of citizenship, the state balked. The Japanese were consumed in anti-Asian sentiment, and their treatment during this time period was endemic of the distrust fermenting between the United States and Japan as both nations grew as international powers.

11.2 Students analyze the relationship among the rise of industrialization, large scale rural-to-urban migration, and massive immigration from Southern and Eastern Europe. (11.2.2)