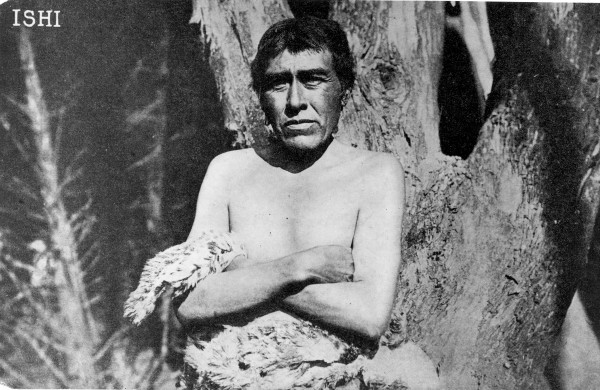 Ishi lived for many moons, a museum man among museum men. Death came to him as he wished - with his friends in the museum-watgurwa.
- Excerpt from Ishi Last of His Tribe by Theodora Kroeber

Ishi lived for four years after he came out of hiding in his ancestral Yahi lands and journeyed to a white-inhabited area of California. After his first face-to-face contact with whites in August of 1911, and before his death from tuberculosis in March of 1916, Ishi lived and worked in one of the public display areas at the University of California Anthropology Museum.

Although the above quote describes Ishi's life as that of a scientist working alongside his equals - a "museum man among museum men" - Ishi was also exploited as an exotic live exhibit of "stone age" Indian culture thought to be "extinct." Only 50 years after the Gold Rush began drawing American whites in large numbers to the brand-new westernmost U.S. frontier, campaigns of genocide and waves of epidemic diseases had reduced the total California Native American population in 1900 to a fraction of what it had been under Spanish and Mexican rule.