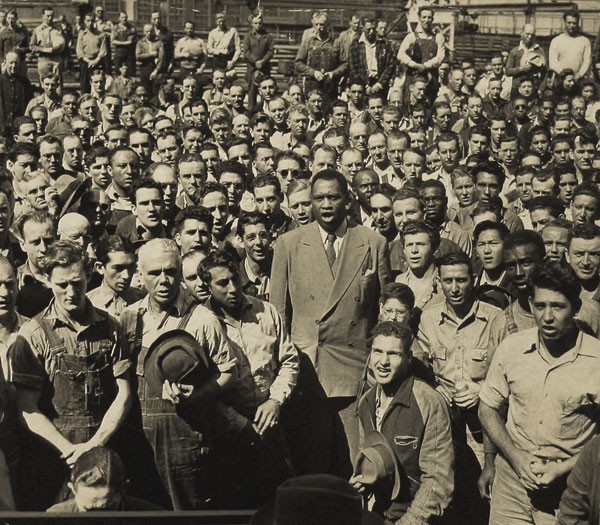 In this photograph, nationally famous actor and singer Paul Robeson visits laborers working at the racially integrated Moore Shipyards in Oakland, California, in September 1942. A renaissance man equally famous for his dramatic roles as Orthello and Emperor Jones on Broadway, and his beautiful baritone voice in Hollywood musicals such as Show Boat and national CBS radio broadcasts, Robeson also fought for African American rights in an era marked by extreme prejudice, segregation, and only the glimmers of organized social protest.

In 1941, the U.S. finally entered World War II on the side of the allies, following the Japanese bombing of Pearl Harbor naval base in Hawaii. Every able-bodied white American male was drafted to fight overseas. As a result, the U.S. Maritime Commission had a dire need to find workers to produce large numbers of "Victory Ships" and "Liberty Ships" for the war effort. On the West Coast, Moore Dry Dock Shipyards in Oakland and Kaiser Shipyards in Richmond became national centers for round-the-clock wartime production. Yet in 1941, there was still widespread opposition to hiring either minorities or women workers. Black clergymen threatened to organize 50,000 African American laborers to march on Washington, DC to demonstrate against employment discrimination. President Franklin Roosevelt quickly responded with executive order 8802, banning all forms of racial discrimination in defense work. He also asked all citizens to join the war effort, working together to outproduce and overwhelm the enemy by building a "great arsenal of Democracy."

What followed was the largest voluntary westward migration of African Americans from the South to California in the nation's history. Between 1942 and 1945, nearly 500,000 African Americans migrated to California. But such large-scale integration in defense did not translate into equal opportunities for housing or education. Those fights for social justice would not advance until the fifties and sixties. During World War II, visits such as Paul Robeson's were crucial to keeping workers' morale high. As he told the Oakland Tribune after his appearance at the Moore Shipyard, "This is a serious job, winning this war against fascists. We have to be together."

To laborers in the 1940s, Robeson spoke with great moral authority. The son of a slave, Robeson was born in Princeton, New Jersey in 1898 and was one of the first three African Americans to be admitted to Rutgers University, in 1915. There, he became an All-American football player, member of Phi Beta Kappa, and served as his class valedictorian. He went on to earn a law degree from Columbia University, but confronted racial prejudice while working as a young attorney on Wall Street. He turned his focus to theater, where he met with resounding success beginning in the 1930s. He used his celebrity status to speak out against the growing threat of fascism, while marching and singing on behalf of labor groups, African Americans, and Soviet Jewry.

The story of the East Bay shipyards has a happy ending. The tremendous social changes caused by national migration during World War II helped to establish California as a leading economic and industrial center of the U.S. for decades to come. The new Californians contributed to creative ferment in social customs, arts, and politics in the postwar era. Even the old shipyards and buildings in both Richmond and Oakland are slated to become part of the new "Rosie the Riveter" National Historic Park. But Paul Robeson has faded from national memory as a result of postwar anti-Communist hysteria. He died in 1976, having suffered government harassment since the 1950s for his admiration of the Soviet Union and Communist Party.