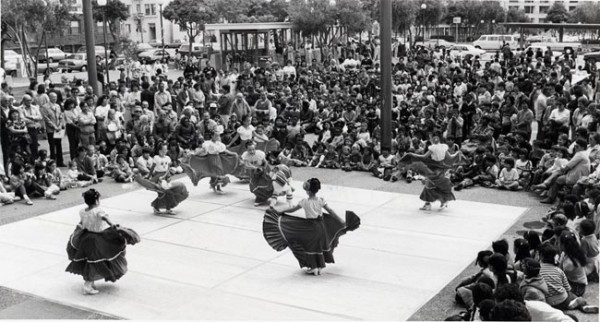 In this photograph, schoolchildren perform a dance celebrating Cinco de Mayo before hundreds of spectators at the Lake Merritt BART Station in Oakland, California. The holiday commemorates the Battle of Puebla, when outnumbered Mexican troops defeated French occupation forces in 1862. For decades, Cinco de Mayo was a small regional holiday celebrated in Mexico. It was imported to the Southwest and California during the early 1970s by the Chicano Movement, which sought to reexamine the cultural roots of Mexican Americans. By the mid-1980s, the increased popularity of Cinco de Mayo throughout the Bay Area was largely due to the tremendous immigration of Mexicans and Central Americans to California.