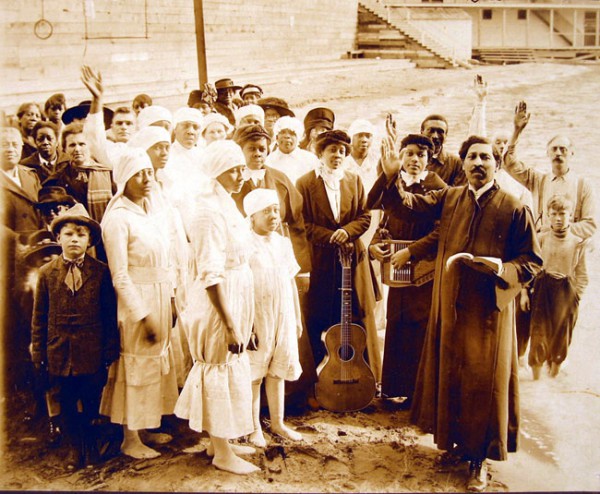 "It could have been a huge communal wedding with all the women dressed in white as brides, or a picnic that had been driven indoors by the rain - except that something somber weighed the air, as dense and palpable as the heat. She saw it in a hardened reflet on the white and colored faces down the table and in the crowd behind. A look of dark and ecstatic love….The muffled cries of love erupted among the standees while others…stood transfixed, their gaze quietly bent on the brown benevolent face of Father Peace."
-- Paule Marshall, Brown Girl, Brownstones

Marshall's description above is fictional, but nevertheless evokes the feeling in this photograph: women and girls all in white, and the "somber" feeling of the crowd gathered at the Oakland waterfront. Shown here is Father Grace, a national Black evangelist and religious leader, baptizing members of his Bay Area congregation circa 1915. Different races did not generally worship together in the early 1900s; in fact, in 2003 it is still not the norm. In this light, it is remarkable that Father Grace maintained a racially integrated following in 67 major cities across the U.S., not all of them integrated as was Oakland.