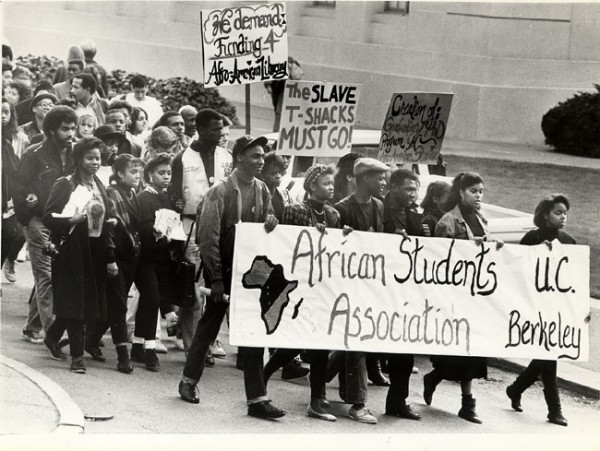 In 1987, more than 400 protestors marched at University of California, Berkeley, to call for the creation of a graduate program in African American Studies. November 6, 1987. Bill Knowland, photographer. Gelatin silver print. Collection of Oakland Museum of California. The Oakland Tribune Collection. Gift of ANG Newspapers.

In this 1987 photo, African American students at University of California, Berkeley, demand a graduate-level program in the Afro-American/Ethnic Studies department. Despite a concurrent weakening of institutional support for affirmative action in higher education, UC Berkeley students pressed forward on a multicultural agenda. In 1986, a student-led movement successfully convinced the Regents of the University of California to fight apartheid by divesting three billion dollars in their endowment and retirement stock portfolio of companies doing business with South Africa. A Ph.D. program in African Diaspora Studies was approved for African American Studies until 1996.