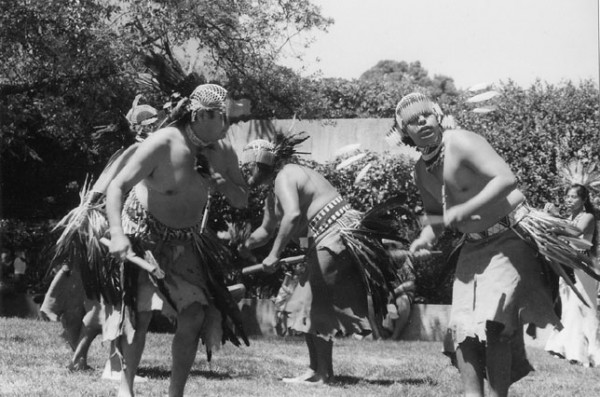 Native American culture in California has become a symbol of perseverance in unlike any other state. Nearly wiped out after 200 years of Spanish, then Mexican, and finally American persecution, the fact that Native American culture still exists in this state defies the odds. This image depicts the Maidu dancers and traditionalists at the Maidu Big Time Community Festival of Northern California Indian Arts and Traditions. Through the arts, such as dancing, singing, basket weaving, and storytelling, the California Indians have managed to preserve some remnants of their previous societies. Because their cultures were built on their relationship to lands from which they have long since been displaced, traditionalists such as these can only hope to preserve traditions whose evolution has long since ended. Festivals are one way to both keep traditions alive, and continue to educate the public about the historical treatment of California Indians.