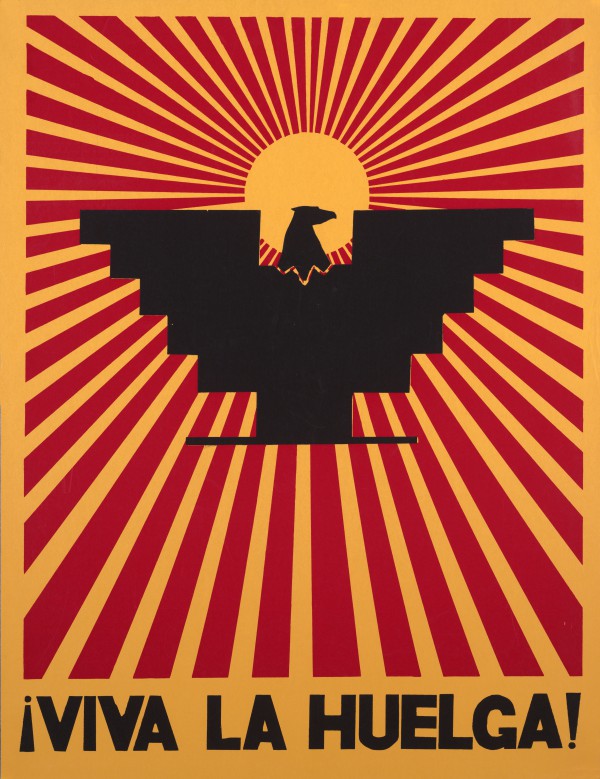 This 1960s poster promotes the United Farm Workers, an organization founded primarily by Cesar Chavez and Dolores Huerta to improve the deplorable wages and working conditions that many migrant farm workers experienced in California fields.

By the 1960s, California had been the nation's leading agricultural producer for several decades. Rich farmlands and a long growing season were factors in that success, as were government-produced ingredients, including torrents of inexpensive irrigation water from massive, publicly financed systems such as the Central Valley project, and a cheap, dependable labor supply, made up largely of Mexican itinerant workers.

California farming increasingly was characterized as "agribusiness," since the industry was not made up of family farms --as was the norm in many other areas of the country--but of vast land holdings operated by major corporations. In California, growers had political muscle that they could bring to bear in both Sacramento and in the nation's capital. California agribusiness had become "a coerced cornucopia," as geographer Grey Brechin wrote.

Mexican workers had been imported into the state since the 1880s, first to work on the railroads and in factories, and later to work the fields. During World War I, for example, labor contractors supplied California growers with seasonal workers from Mexico. Growers prevailed in Congress to not include Mexico in the postwar immigration restrictions that were placed on most other nations, so as to maintain the labor supply.

World War II created a labor shortage on the homefront and Congress responded by enacting the Emergency Labor, or Bracero, progam (bracero meaning "the strong-armed ones"). Thousands of workers were imported, and an even larger number of illegal "undocumented workers" crisscrossed the border to work the fields of California and the Southwest.

Congress granted a variety of extensions to the program, which existed until 1964. It was difficult to disguise, however, that the program depressed worker wages, destroyed their bargaining power, led to terrible living conditions, and drove away local workers.

Chavez and Huerte organized the National Farm Workers Association. When another fledgling labor organization, the Agricultural Workers Organizing Committee, began a September, 1965 strike against 33 grape growers around Delano, California, the NFWA joined in. For months, there seemed to be no chance for the farm unions to win the strike, but in the summer of 1966 they began to win a series of brilliant victories as Chavez built a coalition of labor unions, church groups, student activists, minorities, and consumers. Growing public support for the civil rights of ethnic minorities became a stimulant to union success.

Dock workers refused to load grapes from the struck vineyards, including those owned by Schenley Industries and the DiGiorgio Corp. National boycotts were organized against both companies' products and against stores that sold them.

On April 6, 1966, Schenley capitulated, allowing the NFWA to become its field employees' sole bargaining agent, the first such victory by a farm worker's union in the state. Soon the NFWA and AWOC merged into the United Farm Workers and organized the DiGiorgio field workers.

In 1972, the Union became the United Farm Workers of America, AFL-CIO, and turned its attention to the lettuce growers of the Salinas Valley.Growers there were negotiating what Chavez characterized as "sweetheart contracts" with the Teamsters Union in order to head off an organizing drive in the region by the UFW.

In 1977, after years of struggle and negotiation, Chavez and Teamster leaders signed a five-year jurisdictional pact in which UFW would represent all field workers in future contracts, and the Teamsters the area's cannery workers and truck drivers.

While UFW strength was at an all-time high, it would soon wane, as this would be the last major victory for the union for more than a decade. The story of the UFW in the 1980s is told in the Post Vietnam Era section of this website.