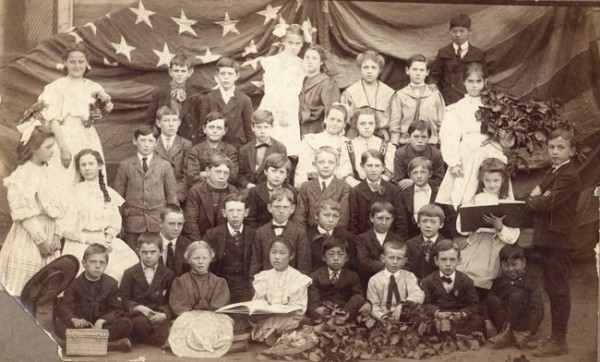 In the late 1800's, racism and discrimination was prevalent in California. The influx of Asian immigrants and the legacy of Native American, Mexican, and African American populations resulted not in a melting pot of diversity, but a caste system based on race. Whites, who had come east with the Gold Rush, the completion of the intercontinental railroad, and the end of the Civil War, had to compete with non-citizen immigrants primarily from Asia who had been recruited to help build the railroads, farms, and other parts of the California infrastructure. In the face of this competition, groups of white Californians began to build legal fences around the state's resources. This was a reflection of anti-immigrant attitudes. Arguably the most visible symptom of the growing racial dissonance appeared in the public education system.

The children in this schoolroom photograph depict a racially diverse classroom that accommodated children of European, Mexican, and Filipino ancestry. But California laws prevented Chinese Americans, Native Americans, and African Americans from attending public schools during this time period. These statutes were challenged in 1884, when Chinese immigrants Joseph and Mary Tape attempted to enroll their U.S.-born daughter, Mamie, in a San Francisco public school. The California Constitution at the time regarded the Chinese as "dangerous to the well-being of the state", and the school refused to admit Mamie. This set up a legal battle that resulted in the California Supreme Court case of Tape v. Hurley (the principal of the school). The high court ruled in favor of the Tapes, declaring that all children had the right to attend school. But citing the doctrine of "separate but equal", the San Francisco School Board instead selected a place for an Asian School that Mamie, and all other Chinese children, were forced to attend.

The Tape v. Hurley battle was a harbinger of things to come for non-whites across the country. The United States Supreme Court codified the principle of "separate but equal" in it's ruling of Plessey v. Ferguson. By legalizing segregation, the Supreme Court paved the way for schools across the nation to prevent children of different races or nationalities from attending the same schools, provided there was an alternative place for them to receive instruction. Racial inequality in education would remain in effect until the historic 1954 Supreme Court ruling Brown v. the Board of Education struck down segregation in education.

Anti-Asian sentiment remained high in California. While emigrants from Asia made up less than 1% of the national population at the turn of the century, they accounted for nearly 25% of California's labor pool. Fearing loss of jobs and increased competition, Californians attacked immigrants with statutes such as the Foreign Miners Tax, which exacted $4 a day from non-white mine workers. The 1854 California State Supreme Court case of People v. Hall excluded all races other than Caucasian from being able to testify against a white person. A local San Francisco law also called for the segregation of all Asian children, including more recent Japanese and Korean immigrants.

While the Koreans complied, the Japanese immigrants refused to be herded into a pan-Asian educational system. The California law caused uproar in Japan, which led U.S. President Theodore Roosevelt to become involved in local San Francisco politics. Fear that anti-Asian Californian legislators and politicians might force Japan to develop an adversarial position toward the United States, Roosevelt enacted the "Gentleman's Agreement" that allowed Japanese children to attend San Francisco public schools, and in exchange the Japanese government agreed to curtail the flow of immigrants coming to California to find work.