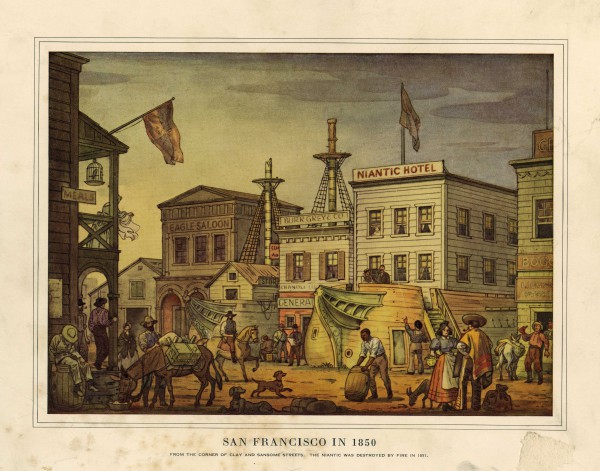 This is a print showing the Niantic Hotel in San Francisco, California in 1850. The Niantic was a ship built in Connecticut in 1832 and was used for whaling. It brought a load of passengers from Panama to San Francisco in 1849 and was abandoned there after all of the passengers and most of the officers and crew left ship and headed to gold country to seek their fortune. The ship was sold and used to house businesses on the waterfront. The quote below explains what happened next:

“The front of the city is extending rapidly into the sea, as water-lots are filled up with the sand-hills which the steam excavators remove. This has left many of the old ships, that a year ago were beached as storehouses, in a curious position …. so that a stranger puzzles himself for some time to ascertain how the “Apollo” and “Niantic” became perched in the middle of a street…. “
—Frank Marryat, English journalist