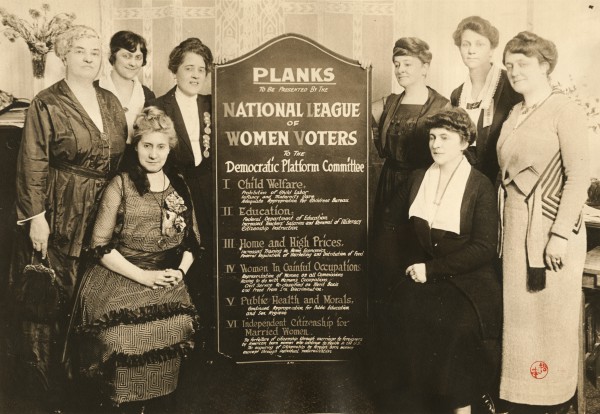 Click image to zoom in.
Or view larger version. “Planks to be presented by the National League of Women Voters” with eight women surround the board listing the planks. 1912-1915. Unknown photographer. Gelatin silver print. Collection of Oakland Museum of California.

This is a photograph of the members of the National League of Women Voters surrounding a sign listing the planks of the organization, ca. 1912-1915. The league’s political platform included; child welfare, education, home and high prices, women in gainful occupations, public health and morals, and independent citizenship for married women. Women gained the right to vote gradually, at the state and local levels, during the 19th century and early 20th century, eventually achieving the passage of the 19th amendment to the United States Constitution in 1920, which gave women the right to vote.