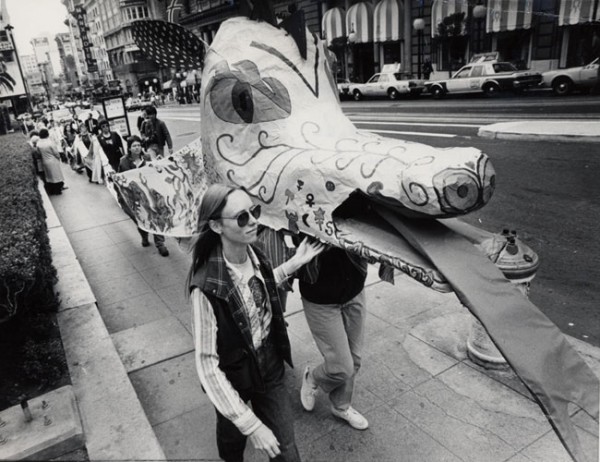 Pat Fraser, member of the Women's Party for Survival, leads a rainbow dragon around San Francisco's Union Square during the International Woman's Day celebration in 1984. 1984.

In this photograph, a woman from the Bay Area Chapter of the Women's Party for Survival carries a papier-mache dragon, a Chinese symbol of power and protection, during a parade for International Women's Day in San Francisco's Union Square. The organization was founded by international peace activist Helen Caldicott, an Australian pediatrician and cofounder of Physicians Without Borders. During the 1980s, California's feminists were greatly alarmed by President Reagan's nuclear arms race with the Soviet Union. In 1982, the state voted in favor of a nonbinding ballot initiative calling for bilateral nuclear weapons freeze between the major powers.