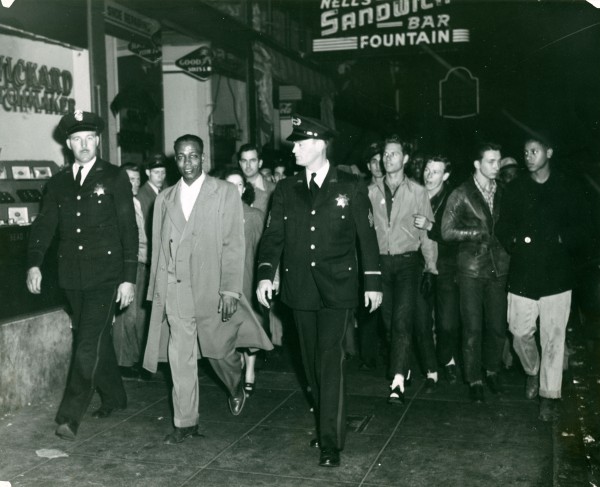 In this 1946 photo, two policemen help an African American railroad porter cross a picket line safely. The man was searching for his wife among the female workers picketing in front of Kahns Department Store in downtown Oakland. Special protection was necessary. Crossing a picket line-even to find your own spouse-was not tolerated in this pro-union atmosphere.

"An injury to one is an injury to all" proclaimed the radical International Longshoremen's and Warehousemen's Union (ILWU). Alameda County's more conservative American Federal of Labor Council (AFL) agreed. Even the teamsters pitched in, preventing any trucks or shipments from entering the county with the exception of those delivering food or medical supplies.

Within 24 hours, more than 100,000 workers had walked off their jobs to support the striking retail workers. People were festive, calling the event a "work holiday." Although the AFL ended the strike abruptly after three days, the retail workers won the right to unionize five months later.

The end of World War II was supposed to herald an era of cautious optimism, a return to peace and prosperity. Citizens had made sacrifices. The government had imposed rationing and price controls. Organized labor supported the war effort, vowing not to strike or slow down industrial production. The U.S. economy emerged intact from the war's devastation. The primary goal was conversion to a peacetime economy. But with the end of the fighting, homefront factory workers received layoff notices or saw their hours reduced. Economic pressures mounted.

Unions were strong in the immediate postwar era, but the economy was unsteady. Soon a new villain-inflation, the phenomenon of rising prices-appeared on the national stage. In 1945, President Truman began lifting price controls, which doubled the price of meat and bread. When Truman reimposed price controls, household staples disappeared from the shelves of grocery stores.

Within two months of the end of World War II, there were more than two million unemployed workers in the U.S., plus reduction of wages and overtime pay. General strikes were called across the country, with the largest ones in Rochester, New York; Pittsburgh, Pennsylvania; and Oakland, California.

The East Bay community supported the General Strike. That support led to Election Day victories for several pro-union candidates on Oakland's City Council. But elsewhere in California, the public had soured on labor protests, inflation, and social unrest. In Southern California, five-term Democratic congressman Jerry Voorhis lost his bid for reelection to an unknown, aggressive, and ambitious young war veteran from Whittier who was bound for bigger things: Richard Milhous Nixon.

In the years that followed, the Red Scare would purge the labor movement of its most inspired leadership. Huge numbers of people mobilized for civil rights and backed away from labor's fights. The steady growth of organized labor's cohesive power achieved its high-water mark in the mid-1940s. Thereafter, with Republican control of Congress and the passage of the Taft-Hartley Act in 1947, it began to recede.