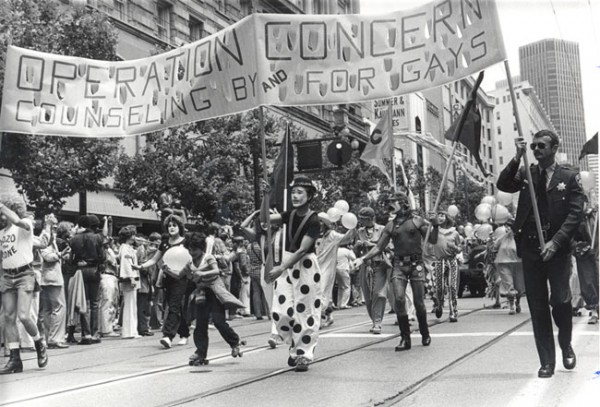 In this 1980 photograph, gay and lesbian participants in San Francisco's Freedom Day parade carry a banner for the Pacific Center for Human Growth, an East Bay social service organization that provided counseling and rap groups for the gay community. The parade, which began with thirty men the year following the 1969 Stonewall Riots, had grown by 1989 into San Francisco's largest public event, attracting more participants than the city's Chinese New Year parade and drawing 300,000 out-of-town participants who arrived from all parts of California, the U.S., and foreign countries.

We Must Love One Another Or Die: The Life and Legacies of Larry Kramer, edited by Lawrence D. Mass (St. Martin's Press)

Gay By the Bay: A History of Queer Culture in the San Francisco Bay Area, by Susan Stryker and Jim Van Buskirk