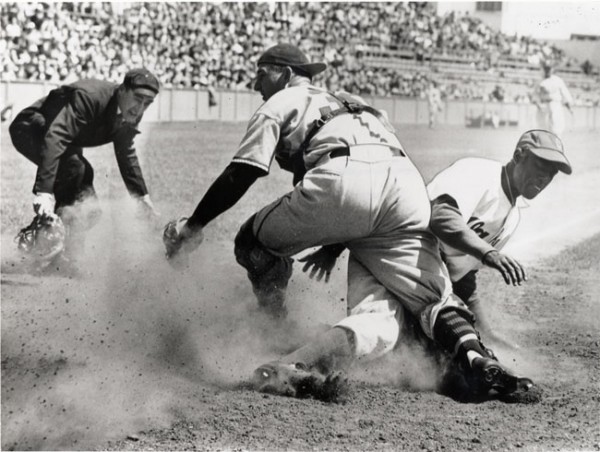 Artie Wilson slides into home with one of the runs that lead the Oaks to an 8-3 victory over the Hollywood Stars. May 1949. Photographer unknown. Gelatin silver print. Collection of Oakland Museum of California. The Oakland Tribune Collection. Gift of ANG Newspapers.

Artie Wilson slides into home as the Oakland Oaks defeated the Hollywood Stars in a May, 1949 Pacific Coast League game. Wilson was one of the Oaks most popular players. The PCL was ranked at the top of minor league baseball. In 1943, four years before Jackie Robinson would make his major league debut, Wilson had very nearly integrated the PCL, but Oaks owner Vic Devincenzi bowed to the wishes of his field manager and withdrew a verbal offer to Wilson. He ultimately came to the Oaks for the 1949 season and won the league batting championship with a .348 average.