Welcome in the new online exhibit.
Now, you will discover and follow the Okies lifes through many black and white photographs taken by historians photographers, like Dorothea Lange and Paul Taylor.

The history of Okies began in 1930s with the economic crisis of Wall Street.
Because of the crisis, most american people lost his job and they didn't have enough money in order to live in good conditions.
This period is nicknamed “The Great Depression”.

After the Great Depression, in the Great Plaines like Oklahoma and Arkansas, the farmers lived in their own farms and they worked in their fields and crops.
Howewer, a dust storm, intitled the Dust Bowl, destroyed their fields with hard and high winds. The drought settled in the crops and the farmers couldn't cultivated.
They had to feed their families, so they decided to leave their farms in order to find a job like fruit picker in California, who is the American Dream for them.

The farmers migrants left their own farms with their remaining and went to California. If they had a car, they drived on the long national road, The Route 66, but they are afraid of breaking car, else they could walk on the road. They accrossed several states and met others migrants who searched job in California.
The information about the job was written on flyers and thousands farmers received it.

Despites the harsh conditions during the journey, migrants wanted to have a second chance in order to live happy with their families and forget their poverty.
They kept hope and continued the exhausting trip.

Howewer, when they arrived in California, their hopes are destroyed.
There was not enough jobs for all migrants and they had to live in a migrants camps who looked for a slum. Their conditions were harsh and horrible, they slep in tents and they wore ragged clothes on their skinny silhouette.
They had to wait to find a job. Sometimes, a businessman came in the migrants camps in order to find workers who had a little salary and worked in illegal and unfair conditions. They are treated likes slaves by the businessman and they are exploited.

The Great Okies Migration is interested several people, like John Steinbeck, writter of “The Grapes of Wraths” who is adapted in movie.
Most phtographs taken the lifes of migrants for the american Government and in order to forget not their lifes and theirs life conditions. 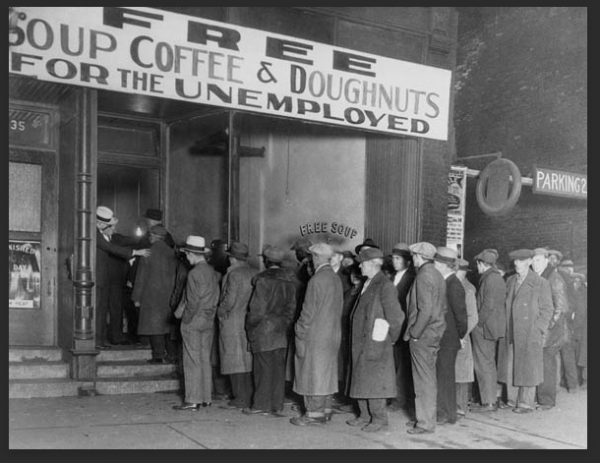 American people wait in front of Soup kitchen in Chicago (Illanois) during the Great Depression (1931). They didn't have enough monney in order to buy food because of the economic crisis of Wall Street. 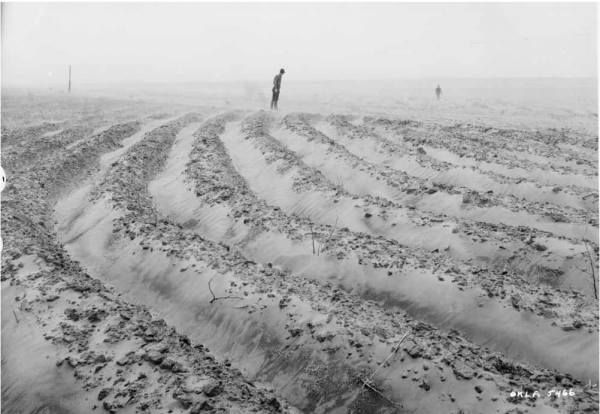 Photography taken by the filmmaker Ken Burns for his new documentary “The Dust Bowl”
A farmer looked his destroyed field after the Dust Bowl and the drought. They couldn't cultivate so they didn't have the choice, they had to go in California. 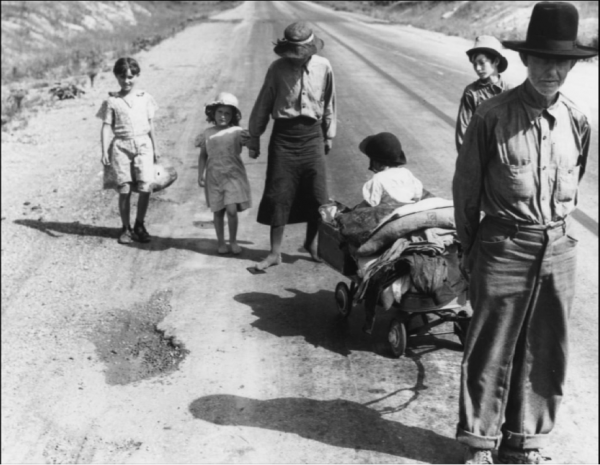 Photography extracted of the documentary book entitled“ An American Exodus, A record of Human Erosion” and written by Dorothe Lange and Paul Taylor
A farmer migrants with his family on the Route 66 in order to go California. 4 farmers on 5 didn't have a car, so they had to walk with their remaining during 4 000km. 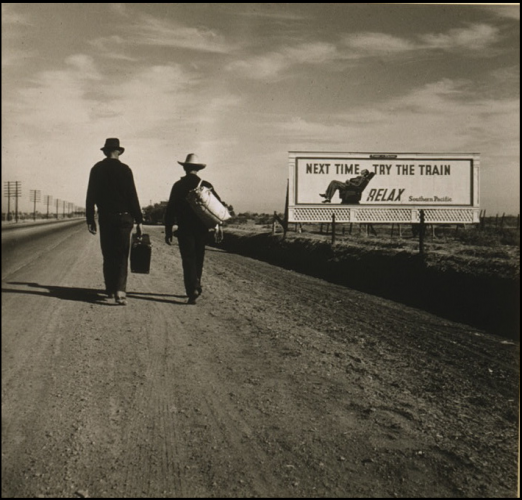 « Toward Los Angeles » taken by Dorothea Lange, March 1937
This photograph shows two men walking down a dirt road, carrying luggage, passing a billboard that reads, “NEXT TIME TRY THE TRAIN RELAX Southern Pacific.” Approximately 2.5 million people abandoned their homes in the South and the Great Plains during the Dust Bowl and Great Depression years. It is doubtful that any of them had enough money to buy a ticket on the Southern Pacific and relax. 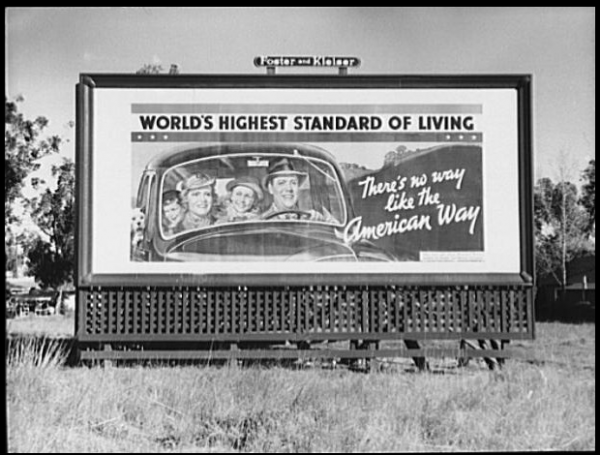 Billboard inV CA Sponsored by NAM (1937 ), taked by Dorothea Lange
Every days, Migrants saw the Billboard about ''The American Way''. Their conditons were harsh and exhausting, but the billboards present the journey like a exciting trip in order to persuade the farmers to go in California. 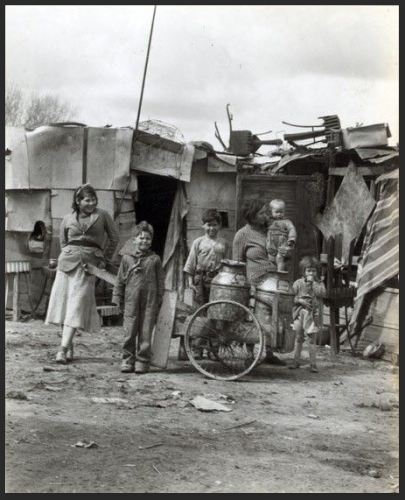 The harsh trust, the migrant camp

The harsh trust, the migrant camp

Tom Collins with a drought refugee and her sons at a Migrants Camp. Most of children grew, live their life and dead in the camps without find a good job.
Photograph by Dorothea Lange 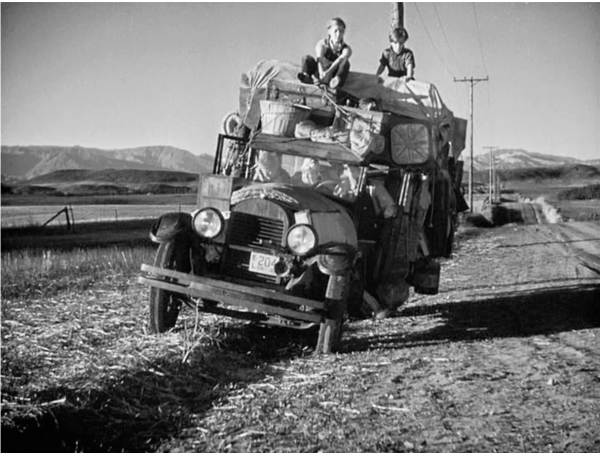 The Okies Migration, an inspiration

Extracted of the film intitled ''The Grapes of Wrath'' (1940)
The Okies History inspired several people like writter, who tell the harsh life of farmers migrants.